Last Thursday night I went with a couple of friends to listen to Daniel Dennett – one of the ‘4 Horsemen’ of the New Atheism – deliver a lecture on a post-religious world. [The other three riders being Richard Dawkins, Sam Harris and Christopher Hitchens]. 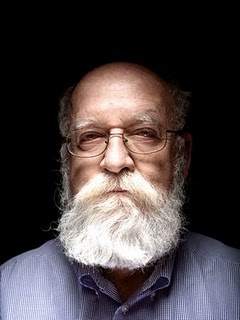 The big hotel ballroom was packed – maybe 400-500 there. Dennett outlined his ‘end of religion’ thesis and his vision of a (better) world free of its restrictions, guilt, irrationality, hypocrisy, and xenophobic hatreds. You get the drift.

He is an engaging speaker, and very good at Q&A which went on for most of an hour after the lecture.

Yes praise. He even played a couple of secular gospel hymns, complete with lyrics like “Bowing to reason we stand together” and “We’ve turned the page, don’t be afraid of the world we’re creating, come on in …” [He said he played these in the States and the crowd was up singing and partying – not a person even twitched in Dublin. An atheist questioner afterwards pleaded with him to drop the ‘brutal’ music and try comedy as a route to joy].

Many criticisms have been made of the New Atheists the most brilliant and devastating by David Bentley Hart in his book Atheist Delusions: the Christian Revolution and its Fashionable Enemies.

One is the sheer intellectual vapidity and meaninglessness of talking of an abstract generalised thing called ‘Religion’ as if there is such a thing. Dennett did this all night. You may as well imagine the world without politics or without culture. It is a nonsense that should earn a Leaving Cert student an F in a Religion exam and becomes an embarrassing conceit by smart people like Dennett who should know better. He also kept saying that Christianity was dualistic in its idea of the immortal soul. Again if you are criticising something you should at least be able accurately to describe its beliefs – especially if you are publishing and speaking on the subject and placing great importance on being taken seriously.

Another is the pure assertion and naive hope that ‘somehow’  [and Dennett did use this word] profoundly moral values, like the ones above, embedded in long Christian tradition and theology, can and will continue to have depth, sustainability and coherence when stripped from their theological context. Dennett offered absolutely no reason why these particular values should be sought in a brave new atheist world. Nor why they would emerge instead of, for example, Nietzsche’s Superman and his ‘will to power’.

When asked about his benign hopes for the future, he said he was an optimist. Fair enough, but it’s hardly the basis for a new secular world order, especially given atheism’s brutal and genocidal 20th Century legacy.

But here’s the thing that was surreal and deeply incongruous about the whole night:

Daniel Dennett, while proclaiming with utter certainty the end of all religion,  is a very religious atheist indeed.

As the evening wore on, it felt more and more like  listening to a rather optimistic, naive, kind-hearted yet legalistic preacher in church.

Moral Behaviour: the entire thrust of his talk was an  exhortation to good and decent and moral behaviour. These are the sorts of values that should shape our behaviour and our world, let’s commit to and work for them.

Mission: he talked of the need to build a missionary movement. Let’s take the secular good news out to the world and make it a better place. His closing words were ‘Let’s do it’. The good news bit was negative – the end of all religion.

Worship: he wanted to inspire us with hymns and get us emotionally inspired, excited, joyful and happy.

Community: Dennett offered the vision of democratic networks emerging of people working towards a common vision of improving the world.  He even suggested that this new atheist movement might consider buying defunct churches in which to meet (he didn’t say what they would do there. Sing atheist songs?).

Eschatological Hope: his whole lecture was built around a narrative of hope – a future vision of a better world (without religion) to inspire us to work passionately in the here and now to bring it about.

Doctrine of Man: Dennett has great faith in humankind. He asserted (while also describing himself as an ‘objective engineer’ of the human consciousness) that ‘People just want to be good.’  Wow.

This is simply a particular religious discourse wrapped up in secular garb. It is all about purpose, identity, meaning beyond ourselves, morality and ethics.

Now of course Dennett would reject this. He does not believe in anything ‘supernatural’. But this is where his ill defined idea of ‘religion’ kicks in.  Christianity, to take one religion, isn’t just an abstract belief in God.  It is belief and action; faith and praxis; relationship with God worked out in kingdom of God living. It also is deeply concerned with “purpose, identity, meaning beyond ourselves, morality and ethics.”

At one point the impression of a genial avuncular uncle switched into bristling impatience with religious people who try to play the ‘faith card’ in public dialogue. To claps from the audience, Dennett exclaimed authoritatively that they have ‘no right’ to do so.

However, the problem with this is that he (and other New Atheists) seems locked into a hubristic modernist mindset, totally oblivious of the reality that he is not mysteriously elevated above the fray in some neutral faith-free zone, uniquely able, because of a supposedly ‘objective’ and impartial and scientific approach, to judge and determine what is ‘truth’. Reading some postmodern philosophy wouldn’t go amiss here.

The irony was that he played the ‘faith card’ all night.