This is the last chapter in Part 1 (The Urban World) in David Smith’s book, Seeking a City With Foundations: theology for an urban world.

The big theme here continues to be the meaning of the city. And in this chapter Smith traces the shifting patterns of meaning within modern Western cities and takes Glasgow as a case study.

The skyline of spires in Western cities from Medieval times on reflected sacred spaces and unified sense of meaning at the heart of the polis.

Contemporary postmodern city skylines now reflect a ‘forest of symbols’. The sacred places of the past are now monuments  [see this post on Christianity as a curious tourist relic of the past]. 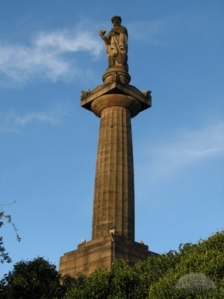 He tells the story of Glasgow city extremely well – with John Knox’s statue looking down over the city holding the Bible over it reflecting the Reformed vision of the ‘Holy Commonwealth’ – where the prosperity of the city would only come with the preaching of God’s word and the praising of his name.

And he unpacks the complex relationship of this vision with money – the growing power of industrialisation, capitalism and secularisation.

And since then, as a post-industrial city, Glasgow has set about finding new meaning in the city in the form of the regeneration of the centre into a ‘city with style’. Smith argues this reflects the new values of globalisation and consumerism.

Thus, the iconic buildings of the early twenty-first century can be viewed in the shopping malls that now encircle Glasgow, retaining in their design reminders of previous sacred buildings, and shamelessly plundering sacred language in promotional campaigns ..

And Smith contends, such ‘cultural renaissance’ leaves untouched the urban deprivation of working class estates in the city.

What then is the meaning of the post-industrial city?

It is full of iconic and technologically impressive buildings.

He quotes Jencks saying that such secular ‘shrines’ are the inevitable result of a global culture driven by the ideology of consumerism and “without common religious beliefs of shared culture.” Such buildings have no meaning beyond themselves, apart from perhaps ‘inflating’ the ego of the city or even nation.

[My comment – think the Burj Kalifa in Dubai. Think the Millennium Spire in Dublin – technologically clever, signifying nothing very much?]

All this remind you of an OT story perhaps?

What iconic buildings characterise your city? What do they mean do you think?