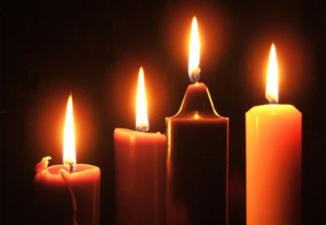 On this 4th Sunday of Advent we’ll turn to a fourth advent person in the gospel of Luke,  that of Simeon.

Like Zechariah and Elizabeth, God takes the initiative to bless a righteous and devout believer by granting him his dearest wish. But again, much more is going  on. The Spirit is on him, the Spirit has revealed he would see the Messiah and the Spirit directs him to the Temple to meet the parents and child.

Simeon’s advent has come at last and his song of praise is all about God – who keeps his promises and who has sent his salvation. After a lifetime of waiting he can depart in peace. The Messiah is a light for Gentiles through the glory of fulfilled promises to Israel. The baby in his arms is of and for the Jews but the salvation he brings will be for all.

And Simeon’s prophecy to Mary foreshadows that the salvation will be costly; light has darkness to overcome. The mission of the Messiah will reveal hearts, encounter opposition and bring grief to his mother.

His words carry huge significance; the whole story of Israel, and of the world itself, rests on the little bundle of flesh in the old man’s arms. This is the supreme ‘upside down-ness’ of Christmas.

No wonder his parents marvel. Let’s join them in wonder and thankfulness and praise.

25 Now there was a man in Jerusalem called Simeon, who was righteous and devout. He was waiting for the consolation of Israel, and the Holy Spirit was on him. 26 It had been revealed to him by the Holy Spirit that he would not die before he had seen the Lord’s Messiah. 27 Moved by the Spirit, he went into the temple courts. When the parents brought in the child Jesus to do for him what the custom of the Law required, 28Simeon took him in his arms and praised God, saying:

29 “Sovereign Lord, as you have promised,
you may now dismiss your servant in peace.
30 For my eyes have seen your salvation,
31 which you have prepared in the sight of all nations:
32 a light for revelation to the Gentiles,
and the glory of your people Israel.”

33 The child’s father and mother marveled at what was said about him. 34 Then Simeon blessed them and said to Mary, his mother: “This child is destined to cause the falling and rising of many in Israel, and to be a sign that will be spoken against, 35 so that the thoughts of many hearts will be revealed. And a sword will pierce your own soul too.”