Continuing an ad hoc discussion of some of Michael Ruse’s claims in Science and Spirituality: making room for Faith in an Age of Science. 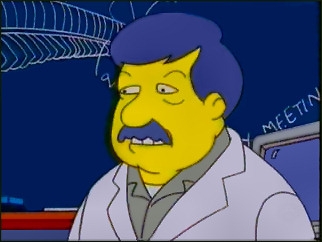 Ruse makes an interesting and persausive point about the late Stephen Jay Gould’s (here appearing in the Simpsons) famous metaphor of the ‘non-overlapping magisteria’ of faith and science.

This phrase is often taken to mean that Gould was happy to let science be science and faith be faith – the two operated in different spheres of meaning or something like that. [This actually is pretty close to what Ruse himself is arguing in this book, although he would not put it that way.]

Anyway, Ruse unpicks Gould’s image a bit to show that Gould, very much like Weinberg, Crick, Dawkins etc, had no time for the specific faith claims of Christianity.

Once Christianity trespasses into the realm of science you are into ‘unscientific’ claims about God, the Trinity, the Resurrection or ‘silly’ talk of miracles. The religious Magisteria Gould had in mind seems to have been more of a vague morality shorn of its theological roots than any acceptance of the supernatural.

To believe that God directs and creates through evolution is to invent a God who is “retooling himself in the spiffy langauge of modern science.” There is no higher reason why were are here apart from the fact that Homo Sapiens managed ‘to survive by hook or by crook.’ Our success as mammals is owed to the extinction of the dinosaurs, probably due to a comet hitting earth. So Gould quipped,

‘In an entirely literal sense, we owe our existence, as large and reasoning mammals, to our lucky stars.’