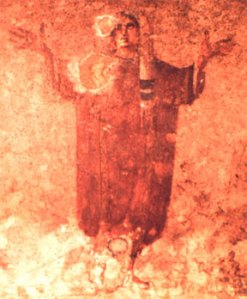 This is no. 10 of a 10 point critique of complementarianism in dialogue with Claire Smith and Howard Marshall’s interpretation of 1 Timothy 2:8-15.

And in outlining these objections, I’m trying to imagine a robust debate with people I know and respect who don’t agree with me, not a war with enemies.

For Christians from both sides can agree on a lot: men and women are different(!); they are equal, both created in the image of God; both sexes are gifted by the Spirit for ministry; and no-one, whether male or female, has any ‘right’ to leadership. Leadership is a gift and calling of God to a life of loving and serving others under the shadow of the cross.

That said, this is not a trivial issue. It fundamentally touches upon understandings of leadership, ministry, Bible interpretation, the dignity and value of women, and whether half of the global church is permanently barred from serving the Lord using their gifts of leading, preaching and pastoring simply because of their gender.

Evangelical Christians differ on all sorts of things – church leadership structures, baptism, spiritual gifts, God’s sovereignty and human free will and so on. Most, if not all, of these revolve around issues of interpretation of Scripture, where, in good conscience and out of a sincere wrestling with the text, Christians come to different conclusions.

Women in ministry and leadership is such an issue.

Most evangelicals have lived with difference over baptism (for example) and cooperated in mission and witness without questioning each other’s commitment to Scripture and the gospel. This sort of big-tent inclusiveness goes right to the heart of what it means to be an evangelical beyond your own commitment to adiaphora – matters of theological ‘indifference’ to wider evangelical unity. This is despite baptism being an issue of deep theological sacramental and covenant significance that shapes church polity.

Why then I wonder is the issue of women in leadership continuing to be so divisive?

Carl Trueman recently asked this same question. I wonder if the answer lies in a challenge to power. Egalitarianism threatens both established leadership structures that give priority to men and a particular reading of the Bible that is used to endorse those structures. Regrettably, power is not given up easily, even when all Christian leadership is a call to ‘servant leadership’.

And I’m sure I’m biased, but it seems to me that this why some of the most divisive rhetoric is coming primarily from a complementarian-hierarchical perspective – Claire Smith’s book being an example.

She talks disparagingly of those who disagree with her as people who ‘call themselves evangelicals’. She wrongly claims those who disagree with her say texts like 1 Timothy 2:11-15 do ‘not apply today’. (See in contrast Howard Marshall’s list of ten ways 1 Timothy 2 applies today). Elsewhere she talks about ‘formerly trusted teachers’ who have presumably fallen away from the truth. Her description of objections to her view as ‘It is God’s word but …’ also attempts, in a rather backhanded way, to connect egalitarian views with a rejection of God’s word.

Such attitudes are unworthy of civil Christian debate and should be repented of. But they are far from solitary examples.

Wayne Grudem is one of the strongest voices here in his insistence that egalitarianism is the ‘thin edge of the wedge’ towards liberalism, acceptance of homosexuality and the undermining of the authority of Scripture (Evangelical Feminism and Biblical Truth, 505). To disagree with the ‘complementarian’ interpretation is to disobey God.

[Of course, many many complementarians do not engage in such divisive rhetoric and happily can live with difference within a big-tent evangelicalism. And I’m sure that there are examples on the egalitarian side which are less than gracious, accusing the other side of misogyny or some such loaded pejorative label.]

I remember sitting in an ethics class back in the late 1980s where the lecturer was defending divinely ordained hierarchy between men and women in church and marriage. As a young guy, I hadn’t really thought about the issue much. What he said seemed perfectly reasonable to me. Looking back I can see why. As a man, it was a very comfortable thing to be told! I couldn’t quite ‘get’ why some women (and men) in the class were disagreeing strongly with what was being taught. It was only sustained study of the Bible over the years that shifted me from that place of comfort.

So where now? Three questions:

First, some realism: Can there be a recognition that neither side are going to ‘obliterate’ the other’s arguments, however passionately they believe the other is wrong? The tone of some of the debate is characterised by this sort of vain hope. The reality is that either side ‘ain’t going away you know’.

Second, evangelicals have lived with other such areas of disagreement for centuries. As with baptism, can there be a willingness to work together in mission and witness and a refusal to let this issue become something that threatens unity around the gospel?

Third, it is possible to imagine constructive and healthy debate on this issue for they are already happening (see here) where both ‘sides’ explore what they disagree about and affirm what they believe in common within a respectful dialogue. So can we please move on beyond the sort of divisiveness that thinks ‘If we can completely demolish their credibility we’ll win the argument once and for all’? Can we all repent of unchristian attitudes, forgive one another and commit speak well of one another in future as a sign of love?

4 thoughts on “What the Bible really says about men and women: a ten point critique of complementarianism (11)”