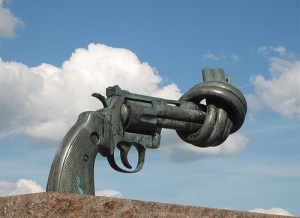 Christian pacifism, as the name tends to suggest, begins with Jesus.

The argument goes something like this (and feel welcome to add / correct / expand, these are just blog musings written while watching the latest Scandinavian drama, Arne Dahl and nothing seems to be happening)

Violence ultimately is imposing your will on another through physical force. Violence in the name of Empire or nation is compelling another community to do the same. Where god is used to legitimate and justify the use of that power, it becomes idolatry.

Jesus rejected the violent power-narratives of Roman Empire and also eschewed the route of religious Jewish violence to ‘liberate’ Israel in the name of YHWH. His was a very different path to the bloody one trodden by the Maccabees earlier and the Zealots later. His mission is that of the servant-king, whose kingdom is of a different form to the kingdoms of the world. Rather than use force to advance his mission, he submits to ‘unjust justice’ and illegitimate violence. He is the innocent one, who gives up endless power to win the victory over the powers; over evil; over violence and death by self-giving love.

Disciples in his kingdom are to be busy peacemaking, exercising humility, being self-giving, repenting, loving their hated neighbours and their oppressing enemies. Paul is such a disciple. He embraces suffering, persecution, imprisonment, character assassination and eventual martyrdom for his Lord. He gives up his rights for the sake of the gospel. He never turns to force to advance his mission. He persuades, argues, reasons, serves, teaches, pastors and writes of grace, forgiveness, faith, hope and love. His identity is in Christ, all other identities are relativised – whether his Jewish pedigree or his Roman citizenship.

He models the way of the cross, as his saviour had done – as all Christians are called to do. It is not for nothing that Christians are to remember the Lord’s death as often as they meet. They are to be people of the ‘crucified God’.

The work of the Spirit also rejects ‘the will to power’. Love, joy, peace, patience, kindness, goodness, gentleness, faithfulness, and self-control fulfil the Law and are characteristic of life within the kingdom of God. This fruit is incompatible with force, compulsion, intimidation, threat, control and fear – all ‘fruits’ of violence and war.

Eschatological hope forms the basis of Christian ethics. Christian hope is of a new creation of God’s shalom. Christians are to be agents of the ‘kingdom come’ here on earth. That vision compels them to be peacemakers not war-makers; to reject the use of arms in favour of sacrificial costly love; to forgive rather than fight.

Historically, it is deeply compelling to me that in the first 2-3 centuries of the Christian church, believers refused to take up arms for Empire; soldiering was seen as a sin, utterly at odds with following the Messiah executed by that Empire. The greatest tragedy of church history in my opinion is the later church’s complicity with power, and the ruthless use of force to support and reinforce that power.

Christian pacifism is also coupled with (I would argue) a deeply realistic Christian scepticism about sinful human capacity for self-deception and the mis-use of power. What ‘just war’ does not end up multiplying unjust violence and who decides what is just or not? (one man’s terrorist is another man’s freedom fighter etc)  What war cannot be presented as ‘just’ (even if it manifestly isn’t) if the ‘will to war’ is there? (Blair and Bush on Iraq – enough said).

OK, even if you are not persuaded by how this sort of thinking about Christian faith, pacifism and war can actually work ‘in the real world’, why is it that the overwhelming ‘weight’ of Christian non-violence in the life and teaching of Jesus, the Lord and head of the church, has historically been marginalised within the history of western Christianity?