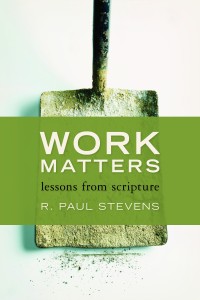 R Paul Stevens begins a short chapter on Providential Work with this quote from a classic study, Studs Terkel, Working.

The blue collar blues is no more bitterly sung that the white-collar moan. “I’m a machine,” says the spot-welder. “I’m caged,” says the bank-teller, and echoes the hotel clerk. “I’m a mule,” says the steel worker. “A monkey could do what I do,” says the receptionist. “I’m less than a farm implement,” says the migrant worker. “I’m an object,” says the fashion model.

Which one does not feel sometimes that we are in the wrong place, at the wrong time and doing the wrong thing asks Stevens.

The temptation is to imagine that the key to happiness and fulfillment is in being somewhere else, doing something else. [This may actually be true in some cases which Stevens could acknowledge.] Stevens says the reality is that God has a providential purpose for our lives right where we are. Don’t go aimlessly from job to job hoping that one will be the perfect fit – find a life-giving purpose where you are.

Stevens goes on to talk about Esther and how God providentially placed her, against all appearances, in the right place at the right time. Christians should then look to the providence of God in their work – life is not haphazard chance. Each believer is placed in ‘such a place and time as this’ – we need to discern the significant moments to serve God amidst the daily small opportunities that come our way.

Stevens’s focus is Esther, but this coheres well with Paul’s advice to Christians in Corinth (1 Cor 7) to ‘stay where you are’ – even if you are a slave:

17 Nevertheless, each person should live as a believer in whatever situation the Lord has assigned to them, just as God has called them. This is the rule I lay down in all the churches. 18 Was a man already circumcised when he was called? He should not become uncircumcised. Was a man uncircumcised when he was called? He should not be circumcised. 19 Circumcision is nothing and uncircumcision is nothing. Keeping God’s commands is what counts. 20 Each person should remain in the situation they were in when God called them.

21 Were you a slave when you were called? Don’t let it trouble you—although if you can gain your freedom, do so. 22 For the one who was a slave when called to faith in the Lord is the Lord’s freed person; similarly, the one who was free when called is Christ’s slave. 23 You were bought at a price; do not become slaves of human beings. 24 Brothers and sisters, each person, as responsible to God, should remain in the situation they were in when God called them.

Paul’s context was a long long way from a the contemporary world of work where we ‘sell ourselves’ (packaging our skills and experience) in a hyper competitive capitalist marketplace.

Is such teaching redundant in a modern globalised information economy where the average length of job in the West for millennials is just over 2 years and who therefore might have 15-20 jobs in their working lives? Where ‘staying put’ for a long time in one job can be interpreted as career failure?

When to say ‘No’ to an ‘upward’ and ‘logical’ career move in order to stay with a sense of calling? God has placed me here and I ain’t going.

When to say ‘Yes’? God is providing a new opportunity.

How to be counter-cultural in our attitude to work?

How to see the providence of God if work cannot be found – about 25% of young people in Ireland are out of work.

These are some of the questions swirling around ‘faith and work’.

Feel welcome to add your own – and some ‘answers’ of course ....

2 thoughts on “Work, the providence of God and hyper-Capitalism”