For a blog called FaithinIreland, Finding Faith in Ireland: The Shifting Spiritual Landscape of Teens and Young Adults in the Republic of Ireland is a publication that invites some comment.

It is a Barna Report produced in partnership with Youth in Christ. Both are American organisations and the researchers, coming mostly from outside Ireland and working with people here, have done a very good job getting to grips with the complexities of the Irish religious landscape. It is a thoughtful, careful and objective summary and analysis.

A summary of the main findings is highlighted on the Barna website here. (I won’t repeat that much here but will just comment on some things that stood out to me).

It is well worth reading and for people in ministry to reflect on their implications.

To understand the state of faith among Irish youth, Barna conducted a study that approached the question from several angles. In the first phase, Barna and Christ in Youth gathered youth workers from a variety of denominations for focus groups. In the second phase, four Irish interviewers spoke to young people and their youth leaders. Youth leaders who weren’t interviewed in person also had the opportunity to respond to the same survey online. The online youth study was distributed to young people in the Republic of Ireland, ages 14–25. A total of 790 youth participated in this research study. Based on this sample size, the sampling error for this study is 3.5 percentage points at the 95-percent confidence level.

Some of the key groupings for data purposes included:

A critical issue in interpreting the data (for me anyway) is what these terms actually mean. In the report a ‘practising Christian’ is defined by Barna as

those who identify as Christian, say their faith is very important to their life and have attended a religious service in the past month (p. 8)

Which, of  course, is a very broad category, especially in a culture where ‘going to church’ now and then is still part and parcel of Irish culture. But you have to start from somewhere.

I may have missed it, but I couldn’t find definitions of what a ‘non-practicing Christian’ was. I assume someone who self-identifies as a Christian but does not tick necessary boxes to show visible sign of actual Christian practice? (To me, in effect this equals non-Christian. Christianity is not a non-practising faith).

Non-believers are identified, I assume, via self-identification.

Having two daughters in the age bracket born and raised here and educated in a local secondary school (not a private Protestant one which a sub-culture of its own), it’s interesting talking over findings with them. Their sense is that the broadness of the categories masks a much lower engagement with even basic Christian claims, let alone a personal response of faith, repentance and living a Christian life.

This report could be called: ‘An Investigation into the Legacy of Irish Christendom’.

Some years ago I did a couple of posts on comments from Archbishop Diarmuid Martin on the devastating failures of Catholic Christendom – here and here.

It’s worth repeating some of what he said then on the disaster of Christendom assumptions.

If faith centres on a personal relationship with Jesus, this will have radical implications for the rule-bound approach of traditional Catholic  catechesis. 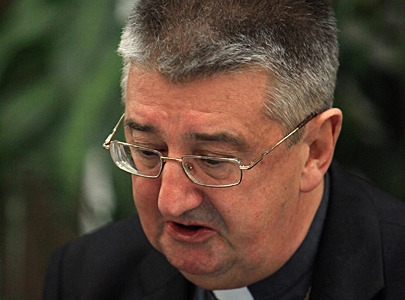 If a mature faith in Jesus requires knowledge of the Scriptures, this will have revolutionary consequences within Irish Catholicism where most families do not possess a Bible.

If young people are going to develop in a personal authentic faith there will mean “revolutionising all our structures” including a fundamental reordering of the reliance on school-based religious instruction in Ireland to a rediscovery of the role of the local parish and of parents.

This will need “a new group of lay people” to be voluntary catechists in their parishes.

All this is needed because “we can no longer assume faith on the part of young people who have attended Catholic schools” or who come from Catholic families.

Ireland is today undergoing a further phase in a veritable revolution of its religious culture. Many outside of Ireland still believe that Ireland is a bastion of traditional Catholicism. They are surprised to discover that there are parishes in Dublin where the presence at Sunday Mass is some 5% of the Catholic population and, in some cases, even below 2%. On any particular Sunday about 18% of the Catholic population in the Archdiocese of Dublin attends Mass.  That is considerably lower than in any other part of Ireland ….

… That the conformist Ireland of the Archbishop McQuaid era changed so rapidly and with few tears was read as an indication of a desire for change, but perhaps it was also an indication that the conformism was covering an emptiness and a faith built on a faulty structure to which people no longer really ascribed.   The good-old-days of traditional mid-twentieth century Irish Catholicism may in reality not have so good and healthy after all …

So the report is effectively putting flesh on the bones of the Archbishop’s words. It does not paint a pretty picture.

Nor are the findings surprising to anyone living here. After decades of being one of the most Christendom countries on earth, the findings show deep confusion over the even the most basic ideas of Christianity, let alone the shape and basis of the Christian life.

The 19-25 age group will be more significant and realistic because the 14-18 yr olds’ attendance at church events will be influenced by parental practice and how religion is still embedded in the school system.

I’ll focus on actual practices because they are somewhat more telling than abstract questions about belief in this or that doctrine which may or may not be understood.

Overall there is a strong sense of Moralistic Therapeutic Deism, a term coined by Christian Smith and Melina Denton in the USA which goes something like this:

1) God created the world and watches over humans. 2) God wants people to be good, nice, and fair. 3) The central goal of life is to be happy and feel good about oneself. 4) God doesn’t need to be involved in one’s life except when there’s a problem 5) Good people go to heaven when they die.

The Barna Report calls this a “morality of self-fulfillment” (p. 33). This is not surprising – after all we are all Americans now are we not? 😉

In terms of moral values, the report asked a couple of questions:

Which is a question that raises more questions than answers: What Church? What aspect of its teaching on sexuality? (e.g. if Church = RCC [as it would for most] then I would be in the 31%). That only 31% of those identifying as Christians could endorse Church teaching fully does say a lot – but it would need teased out more specifically.

A slightly less broad question. Throwing in ‘sexuality’ in again muddys the waters a bit. I suspect most answered on the issue of homosexuality.

This is as expected: – it is in the areas of sexual ethics, individual choice, liberation from oppressive religion, and that ‘nothing should stand in the way of love’ that contemporary Western culture is coming into sharpest conflict with historic Christian sexual morality. [For more on the beliefs behind these developments see this post]

There’s lots more in the report. And, just to be clear, I’m not at all ‘throwing hands up in despair at the youth of today’. I have a vested interest in at least two 🙂 – and admire them and their friends as they navigate life with love and courage in a very different Ireland.

Christendom in many ways was far more corrosive in its enforced hypocrisy and fusion of politics, identity and religion in an all-embracing package deal.

Again and again in this report, the sense comes over of how ‘Christianity’ is little more than external behaviour, arbitrary morality and irrelevant beliefs. I wouldn’t believe in that sort of religion either.

There is a lot more clarity and honesty being expressed as the fog of Christendom lifts. Post-Christendom is in many ways good news for Christians and Christian mission. Increasingly there is no comforting social and political bulwark for churches to rely on, let alone control.

And that is not a bad place for the church to be – a place of weakness and humility and having to think anew about its mission within a culture that has less and less connection with its Christendom past.

In the final section there are some suggestions around the need for spiritual guides and mentors.