Over at the Guardian, there is an article on Lauren Greenfield who has spent years photographing the extreme rich  – ‘How the Modern World Fell in Love with Money’

Greenfield has amassed 500,000 images of the often absurd lives of the wealthy. The highlights – including a picture of go-go dancers hired for a 13-year-old’s bar mitzvah – are published by Phaidon in a £60 2.5kg tome called Generation Wealth. An accompanying behind-the-scenes documentary film is released in the UK next week.

Can’t say that I’ve had much experience hanging around with the absurdly wealthy (unless some friends are keeping their Swiss bank accounts secret).

But I did have a few days in Cannes during the film festival a few months ago (long story). It was a brush with an alternative reality for sure.

Here’s a photo that I really like. Wonder if you have a caption? 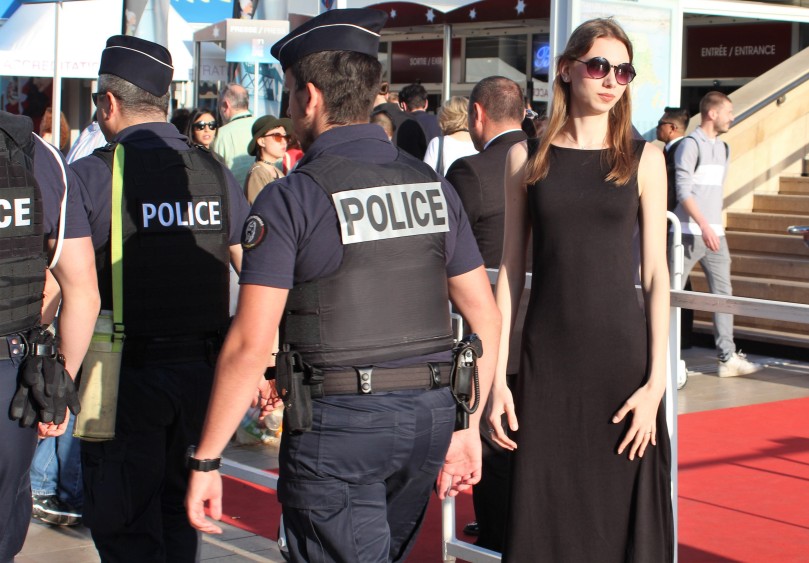 A bit of context. The festival is ticket only. Many main event films require black tie / evening dress. Those with tickets are expected to attend or give their tickets to others so that there are no empty seats. So you get lots of young people dressed up hanging about outside hoping for a free ticket.

And many who do not get in, like this woman, pose for photos in front of the red carpet. Sort of imitation celebrities if you like. Almost touching the dream of limitless wealth that pervades the festival. Literally surrounding the pavilion were hundreds of multi-million dollar yachts, occupied with crews and venues for after-film parties.

Yet that dream is fragile. I grew up in ‘the Troubles’ in Northern Ireland and have never seen more security than at Cannes. Police and army patrols were on every corner. As she posed, this group of policemen marched by. She pretended not to notice them.

Is this picture a sort of parable for late modern Western capitalism I wonder?

As the Guardian article says, more and more people pursue and revel in dreams of limitless wealth. Yet, at the same time, such dreams are both utterly unattainable (except for a tiny few) and unsustainable. Such injustices may reach breaking point as hyper-capitalism collapses in on itself.

A growing number of academics warn that the widening gulf between the richest 1% and everyone else could lead to a backlash. The richest 0.1% of the world’s population has increased their combined wealth by as much as the poorest 50% – or 3.8 billion people – since 1980, according to the World Inequality Report. The report, by the French economist Thomas Piketty and 100 other researchers, also found that the richest 1% of the global population “captured” 27% of the world’s wealth growth between 1980 and 2016. Piketty warns that inequality has ballooned to “extreme levels” in many countries, and will only get worse unless governments take co-ordinated action to increase taxes and prevent tax avoidance.

One thought on “In love with wealth”