A couple of posts back there was a promise to come back to Ephesians 5:21-33 and look at it from a different interpretative angle – that of Cynthia Long Westfall.

I invite you to read this and compare to the earlier post on John Stott’s interpretation. Which do you find most convincing and why?

Her book has been out a couple of years. You can listen to an interview with her here at the excellent OnScript website – a sort of biblical research podcast treasure trove.

Her big argument is that Paul is subverting male privilege in home and church. The focus of the text is clearly on husbands. Paul is teaching them what life within God’s economy looks like within a Greco-Roman culture of male patronage, power and superiority.

In the context of Paul’s day, the basic patronage relationship was reflected within the marital relationship. The husband is superior in power, status, honour and value. The wife receives the benefits of his standing and in return offers him respect, chastity, obedience and loyalty.

It is this patronage relationship that is being reimagined (subverted) by Paul in light of Christ. A radically new way of relating between husbands and wives is in view. It, of course, still operates within the given culture of his recipients – Paul famously does not directly confront slavery, nor does he advocate social revolution in terms of marriage.

Interpretations that focus on wives’ submission and the analogy of the husband to Christ (verse 23) without proper regard to the grammar and syntax of Paul’s thought act to distort his message and propagate a false view of (male) authority. (p. 93).

To summarise from various places that Westfall discusses the Ephesians text:

25 Husbands, love your wives, just as Christ loved the church and gave himself up for her 26 to make her holy, cleansing her by the washing with water through the word, 27 and to present her to himself as a radiant church, without stain or wrinkle or any other blemish, but holy and blameless.

He promotes a model of servanthood and low status, consistent with the humility of Christ’s incarnation, precisely for men, who have power and position in the Greco-Roman social system. (p. 23).

[My comment – This is where interpretations that end up defending male ‘headship = leadership’ and insisting on female submission to that ‘authority’ tragically actually reverse the thrust of Paul’s upside-down kingdom ethic].

So what of ‘headship’?  Does the Genesis account that Paul references, somehow root female submission in a creation ordinance (as John Stott says and complementarians in general claim)?

The primary focus in the Ephesian household code is on the husband’s role. The language both reflects the model of Jesus’s servanthood and exploits the metaphor of ‘head’ to create a similar effect as in the episode where Jesus washed the disciples’ feet. (p. 165)

And this to finish.

In effect, Paul flips the patron metaphor of being the wife’s head (protector and source of life) … He has given an explicit application of Jesus’s summary of the law: “In everything do to others as you would have them do to you; for this is the law and the prophets.” (Matt 7:12 NRSV). Paul applies Jesus’s teaching literally to the men: “Husbands should love their wives as they do their own bodies. He who loves his wife loves himself” (Eph. 5:28 NRSV). Paul’s caveat is that she is his body. The intertextuality between Ephesians 5:28 and the Jesus tradition is transparent. (p. 166).

Had the privilege of preaching at MCC on Sunday. Since it was the 100th anniversary of the end of WW1 it seemed appropriate to think of Jesus’ teaching on loving your enemies (Luke 6:27-36).

I finished the sermon with this picture and associated sound clip. The picture is of film onto which different microphones in the trenches were recording the sound intensity of enemy guns. Using triangulation, they could then pinpoint the location of those enemy guns.

The films were unearthed a while ago in the Imperial War Museum. The most dramatic one is of the 11th of November 1918, the day the guns went quiet. The film shifts from spikes of sound to the flat line of silence (above).

Clever people have reverse engineered the film to recreate the sound it first recorded. So, although there are no sound recordings of WW1, we can now hear the ending of the war and the first moments of peace after years of senseless slaughter.

Have a listen to the arrival of peace

The closing point I made in the sermon is that this is an image of Christian eschatological hope. Christians believe that one day the guns will go quiet for ever: no more war, no more mass shootings, no more violence, no more arms industry making billions from deaths of others. God’s kingdom will come, the Prince of Peace will rule, God will be ‘all in all’.

And in the here and now, it is the calling of those who belong to that King and his kingdom, to live lives of peace within this violent world. To lives that point to another kingdom to that of the world. A kingdom in which disciples refuse to take part in war, but follow the even harder calling of loving enemies.

Because this is what God is like – a God of kindness and mercy to the undeserving.

27 “But to you who are listening I say: Love your enemies, do good to those who hate you, 28 bless those who curse you, pray for those who mistreat you. 29 If someone slaps you on one cheek, turn to them the other also. If someone takes your coat, do not withhold your shirt from them. 30 Give to everyone who asks you, and if anyone takes what belongs to you, do not demand it back. 31 Do to others as you would have them do to you.

A couple of rules of engagement with views different to yours are:

It is easier to write this than to do of course. Don’t know about you but I fail regularly. But, the world, and the church, would be a much more civil place if we did.

This is a continuation of posts on Ephesians 5, this time specifically on wives and husbands and verse 23 in particular.

Over the last few weeks I’ve read a wide range of interpretations of this verse and wider passage (21-33). Probably one of the best articulations of a ‘traditional’ view of male ‘headship = leadership’ and female submission in marriage is John Stott in The Message of Ephesians which was originally written in 1977 as God’s New Society. So it dates back a long way. There have been forests of books since on this topic, but Stott is such a good writer and exegete that it remains, I think, hard to beat.

Like many others I grew up as a Christian reading Stott. He is a huge influence and I’ve nothing but admiration for him. He is one of the great figures of the 20th century church.

In this post, I’ll try simply to summarise his interpretation of the text and then add some questions and comments. And then in the next post I’ll put it in dialogue with a recent and widely praised book articulating a very different interpretation of the text – that of Cynthia Long Westfall (2016) Paul and Gender: Reclaiming the Apostle’s Vision for Men and Women in Christ. 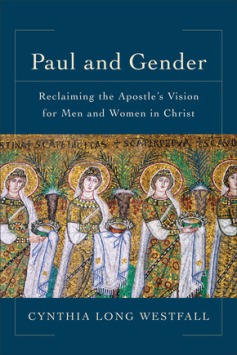 If you have read this far, you may be groaning, ‘texts like these have been gone over 100s of times!’

True, but I suspect that for many, on whatever side of the debates, practice is largely inherited and assumed. The issues need aired for each generation. And it is an interesting angle on biblical interpretation to compare and contrast two views separated by about 40 years and a lot of published words.

A bullet point summary of Stott:

Stott then applies this passage with 5 reasons for wives to understand the nature of biblical submission. He confesses that

‘it surprises me how unpopular this passage is among many women.’ p. 232.

The five reasons are:

‘Thus “submission” and “love” are two aspects of the very same thing, namely that selfless self-giving which is the foundation of an enduring and growing marriage.’ p. 235

This remains one of the best examples of a traditional male ‘headship – leader’ interpretation because Stott is too good an exegete not to give a full-orbed analysis of the text.

Looking under the surface, his motive is to be obedient to what the Bible teaches. He goes to great lengths to clarify and modify any potential abuse of this text to control women.

But in doing so, and particularly in his five reasons to women to submit, some problems become apparent:

The notion of husband as leader is read into the text rather than out of it. Stott several times writes ‘leader’ and talks about ‘a certain headship’ indicating his awareness of how this is, at best, an implication which depends on a particular interpretation. A huge amount is built on an argument from silence – that the reference to the creation account somehow implies that Adam being created first leads to ‘headship’.

However irenic and well-articulated the final five reasons for wives to submit to husbands are, it is ironic that Stott’s main application is aimed at women.

The whole tenor of the passage is addressed to husbands – to help them reimagine what it is to be a Christian husband in a Greco-Roman world. Wives are pretty well assumed to do what wives do in that culture – if radically modified by the fact of mutual submission in verse 21. Yet so much interpretation of this text ends up being about wifely submission and defending the husband’s ‘authority’. There is something very askew in this ordering of application.

What actually in practice is being argued for? Where Stott has integrity is how he recognises that the text itself drastically qualifies normal notions of ‘leader’ and ‘authority’. As he says, submission and love become synonymous. Husband and wife submit to each other [this is strongly resisted by some later harder-line complementarians]. If this is the case, the whole idea of ‘leader’ and ‘headship’ becomes virtually meaningless in practice. It seems to me that this is why modern complementarian practice is reduced to arcane theoretical discussions of ‘who makes the final decision’ when husband and wife disagree. Really – is that what Paul has in mind?

Rather, might this not all point to the problem being one of insisting on a faulty notion of ‘headship’ that is just not there in the text? Despite Stott’s assertion (and it is an assertion) that ‘headship’ is rooted in creation and therefore transcends all cultures, it remains a conceptual leap that is highly debatable. Great caution should be exercised in building edifices on shaky foundations, especially when those edifices (in my humble opinion) have tended to disempower women.

The irony is that the thrust of Paul’s teaching in Ephesians 5 is going a different direction.